The 1804 Fund was endowed in 1979 by a visionary gift from the estate of alumnus C. Paul Stocker "to enhance the quality of university programs and life." Designed to foster innovation and collaboration across disciplines, all awards support the University's core mission of "maintaining, strengthening, and enhancing a learning-centered community." Since awarding its first grants in 1980, the fund has supported more than 600 projects and programs.

Learn more about the 1804 Fund Awards

Endowed in 1961 by a gift from alumnus Edwin L. Kennedy and his wife, Ruth, the John C. Baker Fund was established to support faculty improvement and research efforts. Awards support the research, scholarship and creative activity of regular tenured and tenure-track faculty members, as well as administrative staff.

Established in 2003 through a $500,000 gift from Ursula and Dr. Gilbert Farfel, the Farfel Prize is awarded annually by the Scripps College of Communication's E.W. Scripps School of Journalism. Presented at the National Journalism Awards by the Scripps Howard Foundation, the prize is given to recognize outstanding investigative reporting throughout the country.

Learn more about The Farfel Prize 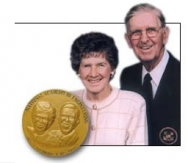 Modeled after the Nobel Prize, the National Academy of Engineering established the Fritz J. and Dolores H. Russ Prize in 1999 to recognize outstanding achievement in an engineering field. Established in 1999 through a multimillion dollar endowment from the late Fritz Russ and his wife, Dolores, the Russ Prize is the top bioengineering prize in the world, awarding winners $500,000.

Lean more about The Russ Prize